A SIGMA expert who prefers to stay out of the limelight lent me a Sigma SD15 and 70mm lens.  He had read my previous post about the buffer issues with the SD14.

After meeting him, I ran into some of my daughter’s friends.  They did a “sad” face pose because she’s still in Germany (we want her back!). 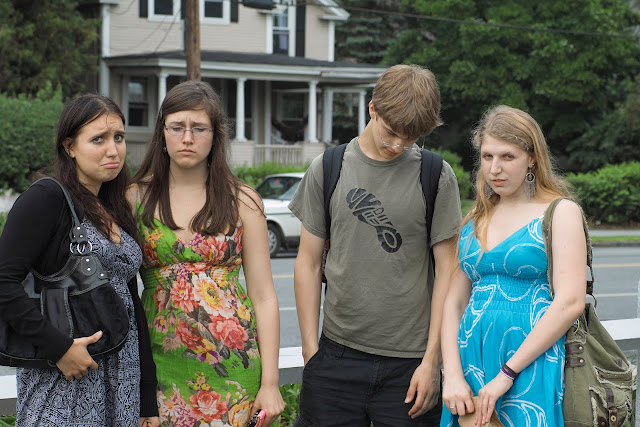 Today I took these photos (50-200mm) at the 2011 Dartmouth Graduation.  The day before I took some quick street shots with the camera and the 70mm Street Shots

I’ve been building a new pano rig, mostly to do partial panos, or photographs along the Brenizer Method.  No robotics (yet).

Here’s the new rig.  I left it next to a tree (during the graduation) while I took photos, freehand, with the camera.  The Sigma expert thought me daft for using the 50-200mm (instead of the 70mm).  He’s probably right.  But I think it says something about the SD15 that it delivers very nice photos (I think) with even a $150 lens.

I did some partial panos; they’re not very good.  I’m hoping to do some better ones this week (before returning the camera) and will post them in a later post.

I’ve also been reading the Sigma forum on dpReview Sigma SLR Talk.  Most Sigma users are upset that Sigma’s latest camera isn’t $1,500 (as expected) but $7,000!  I’m still trying to figure out if the SD14/SD15 is better than Canon/Nikon/All Other (bayer sensor) cameras (Sigma is Foveon).

The Sigma expert who lend me the SD15 says most lenses don’t allow the Foveon sensor to show what it’s capable of and that even most of the SD1 shots now arriving are hurt by poor lenses or camera shake, etc.

Although the SD15 doesn’t give me as much a wow as my DP1 shots, I can say that, like the DP1, the images out of RAW are closer to what I remember than other cameras I have used.  Although other DSLRs take very nice photos there’s a certain pop that comes out of the Sigma images before you try to make them better.  Ironically, though the Sigma cameras are slow in operation, the whole process of finalizing images is fast with these cameras because I need to do very little adjustments.  Usually those fixes aren’t to improve what the camera saw, but to tart them up.  In other words, the original images are almost too realistic (dull).

I talked my friend Mary into getting a prime lens for her T1i (a 50mm).  She’s hooked!  I’m curious to compare it with the Sigma later.  I’m still leaning toward a DP1/DP2 combo and a Canon/Nikon DSLR (in desire, not what I can necessary afford).

Hopefully, I’ll get to those Brenizer type shots this week.  I hope I don’t like them too much.  I don’t want to become one of those Sigma fanatics.