All winter, while my workshop (garage) has been too cold for robotics, I’ve dreamed about making a panoramic robot with one of Logitech’s new HD webcams. This weekend I got to it.

The 910 has a 5mp sensor (though they use software to bring that up to 10mp for advertising foolishness). Naturally, a webcam will never beat the photo quality of my Canon G10 (now G12–more on that in the weeks to follow) or Sigma DP1 that I used last summer, but it could reduce the complexity of the setup and go fast. Speed is what I’m really after.

Last summer’s camera panoramas generally took more than 12 minutes to complete. The Sigma DP1 was especially slow (it’s a slow camera to begin with). Already, I’m able to create a 3 row, 360-degree panorama with the 910 in less than 3 minutes.

Here is one I took in my backyard.

Here’s a photo of the 910 on last summer’s Arduino panoramic head. I moved the camera closer to the center point on the tilt and that improved the pano stitching. You can see in this photo why there would be parallax problems in the earlier efforts. 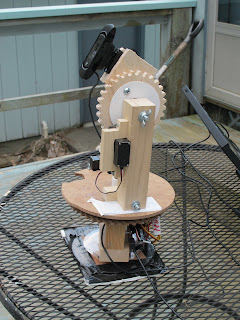 My next step is to create a robotic head specifically designed for the webcam. Because it isn’t heavy I don’t need to distribute the weight on a ball-bearing platter. I plan on using two GWS S125 IT 2BB Sail Winch servos. These servos rotate 360 degrees, unlike most servos that do under 180.

I’ll also try the new Arduino UNO. Apparently, it has a different serial chip than the Arduino Duemilanove. Improved serial speed would be a plus since that’s how I send commands to the servos, through the PC. With the cameras I often had the Arduino run a program, but since the webcam has to connected to the PC, I might as well have the PC run everything.

The controlling software is done using C#. I modified one of the sample programs that come with open-source aForge. I can’t say enough great things about aForge .NET.
Capturing an image from a webcam, programmatically, is a pain. aForge makes it relatively easy. In the following weeks I hope to post my code for my robotics (which I should have done last year). If you can’t wait contact me at max at htgrp dot com.

Next week I hope to build a robot that creates 64 megapixel, correctly stitched panos in under a minute.

Other to-dos are fixing the exposure on the webcam and/or fixing the focus point. These require some DirectShow craziness. Kimchi and Chips have done it–whoever they are! The bottom line is that yes, the Logitech 910 is a cool sensor. I bought mine for $65 reconditioned on Ebay. Because it really has only 5mps I’m wondering if the cheaper 310 wouldn’t be just as good. A test for another day.