After many months of tinkering I finally have a panorama-head robot that creates panoramas with my Sigma DP1.  If you don’t know about Sigmas, they are cameras that will drive you mad, especially if you’re used to the polished software/firmware of a Canon or Nikon.  For example, the DP1 won’t turn on unless you remove the lens-cap.  When you do take a photo, it seems to take 45 minutes to save it and get ready for the next.  When it comes to auto-focus it sometimes gets confused.  However, Sigmas have a unique sensor, called a Foveon, that supposedly takes better images than other cameras.  No one believes this but the owners of Sigma cameras.  What can I say?  I won’t part with it.

Obviously, such a camera is not going to have a remote shutter release like my Canon G10 (though their DSLRs, like the SD14 and SD15 do).  So I needed to build a custom shutter release. Here’s a photo: 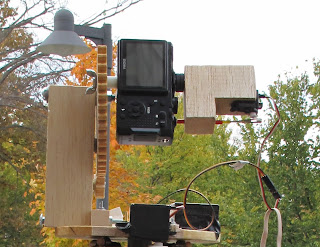 The shutter release is built into a block of balsa wood.  Indeed, much of my panoheads use balsa or basswood.  Balsa is very light.  It’s also easy to cut.  The block of balsa you see above weighs as much as a similar block of Styrofoam, to give you an idea of weight.  The black motor is a small servo.  I think I got that one from Sparkfun for about $8.

There are similar DIY servo-actuated shutter releases on the Internet.  My addition, I think, is using push rods instead of the arm of a servo horn.  I used a Sullivan Push Rod.  In these kits is an assembly that allows you to attach hard plastic (yellow in the one above) onto a servo arm, and put that through a plastic sleeve.  You can’t see it well, but the yellow plastic is threaded so you can change it’s length, relative to the servo horn, by turning it.

I cut the hard yellow insert to about 2 inches, then the sleeve (it’s red) to about an inch and a half, then attached it to the servo.  When the servo turns it presses the push rod onto the shutter.  Since the insert is nylon, it doesn’t scratch the shutter button and it isn’t so brittle that it wouldn’t bend before doing damage.

By varying the servo command, I can have the servo press the shutter button hard enough to focus, then after a second, harder so that it fires the shutter.

Into the balsa block I Gorilla glued a 1/4-inch coupler.  I recommend threading a screw through it first so the glue doesn’t seep inside.  A 5/16th drill bit (which unfortunately doesn’t come standard in many drill bit kits) seems to be a good size to drill.  I then bought a bunch of hot-shoe attachments from China off Ebay.  1/4″-20 Tripod Screw to Flash Hot Shoe Mount Adapter.  Less than $2 each. You might need two to make one attachment because you need one nut to tighten to the camera and the other to the balsa block.

Here is the whole setup that I used for the co-op panorama. 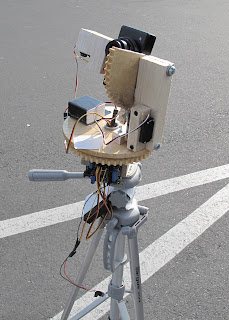 So far, the servo shutter release has worked better than I expected.

Here is the coop panorama